The impact of COVID crisis on European public opinion – Part 2

On 17 December 2021, the Foundation for European Progressive Studies (FEPS) and the Friedrich Ebert Stiftung (FES) unveiled the second and last part of the research project “The impact of COVID crisis on European public opinion”, which has been realised in cooperation with Instituto Cattaneo.

In the span of 18 months – and with the help of DYNATA – we asked twice to 6000 citizens from across 6 Members States how they felt, what they thought about the EU and their respective states at the time of crisis, whom they entrusted their safety and hopes into, as also what they thought the future of Europe would entail from this point onwards.

The very final report drafted by Kieskompass, which also featured national case studies and comparative aspects, is designed as a useful handbook for all the Progressives – who enter into public debates to argue for more social solidarity, justice and a new kind of social contract. 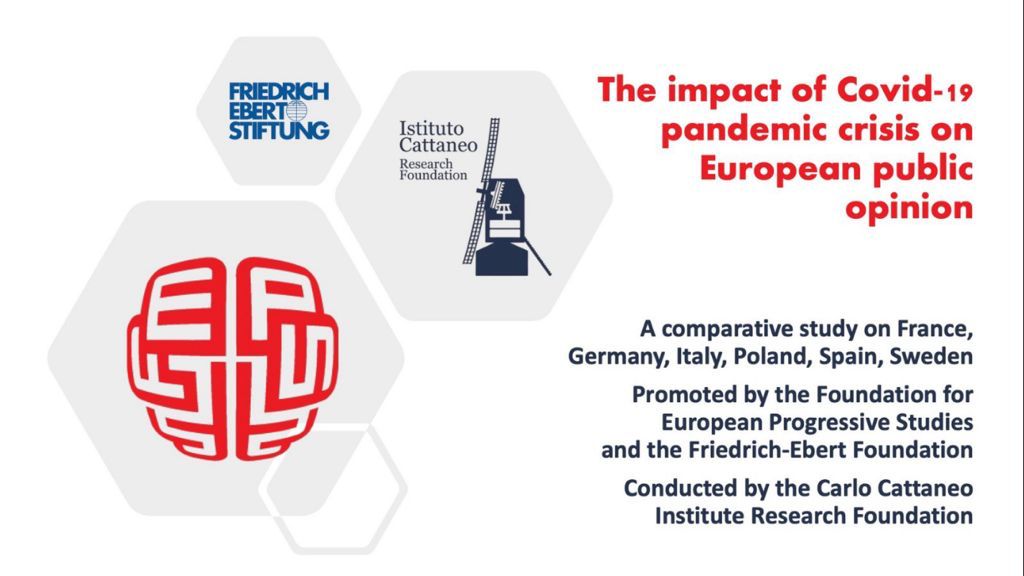 Find all related publications
Publications
See all
Although many volumes have already discussed several COVID-related socio-economic phenomena, relatively less attention has been […]
This is the first publication of the research project Builders for Progress
As vaccines allow a gradual return to a “new normal”, this book offers an invitation […]
Policy Study by FEPS Young Academic Network (FEPS YAN) The paper outlines a vision of […]
Find all related events
Events
See all
Past
See all
24 May 2022, 14:00 – 15:30 CET Voting during pandemics: making democracy resilient in turbulent […]
To mark the European Day of Solidarity between Generations, the Young European Socialists (YES) and the […]
Friday, 17 December 2021, 12:40 – 14:30 CET This was the final event of the […]
Find all related in the media
In the media
See all

by Corriere della Sera 19/05/2022
XWe use cookies on our website to give you the most relevant experience by remembering your preferences and repeat visits. By clicking “Accept”,
you consent to the use of ALL the cookies. However you may visit Cookie Settings to provide a controlled consent.
Read MoreREJECTACCEPTCookie settings
Manage consent