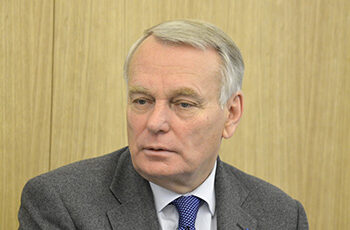 Secretary General of the Fondation Jean-Jaurès from January 2018

Jean-Marc Ayrault holds the (CAPES) diploma for teaching German in Secondary Schools. He developed a passion for politics at a young age and became member of the Socialist Party (PS) at the age of 21.

In 1977 he became Mayor of Saint-Herblain, then of Nantes in 1989, where he was re-elected three times. From 1986 he was a Member of Parliament for the Loire-Atlantique region. Where he played an important role and. in 1997 became leader of the Socialist Parliamentary group within the Assemblée générale. On the 15th May 2012 he was appointed as Prime Minister by the newly-elected President of the French Republic, François Hollande. He was then re-elected MP in his constituency at the first round the following 10th June. On the 31st March 2014 he left his position as Prime Minister and became a Member of Parliament again until March 2016. From February 2016 to February 2018 Jean-Marc Ayrault was Minister for Foreign Affairs and International Development.

XWe use cookies on our website to give you the most relevant experience by remembering your preferences and repeat visits. By clicking “Accept”,
you consent to the use of ALL the cookies. However you may visit Cookie Settings to provide a controlled consent.
Read MoreREJECTACCEPTCookie settings
Manage consent