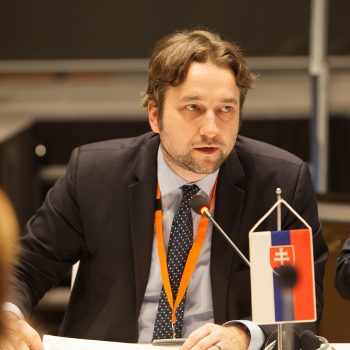 PhDr. Ľuboš Blaha, PhD. has been the Member of Parliament for the left- wing SMER party, Chairman of the Committee of the National Council of the Slovak Republic for European Affairs since April 2012. Prior to his CEA chairmanship he served as the Advisor to the Speaker of the National Council of the Slovak Republic.
He has initiated a number of political science research projects at the Slovak Academy of Sciences revolving around embedding authentic research activities into the undergraduate curriculum. He is currently lecturing on history of political philosophy at the University of Cyril and Methodius in Trnava, Slovakia. He is a published author of several monographs: “Social Justice and Identity” (2006), “Back to Marx?” (2009 Slovak Literature Fund Award), “European Social Model – What’s Next?” (2014), to name a few.
Mr. Blaha completed master degrees in Philosophy at the Comenius University, Bratislava, Slovakia in 2003, and in Political Sciences and International Relations at the University of Matej Bel, Banska Bystrica, Slovakia in 2004.
He was awarded his PhD on theories of justice in modern egalitarianism and neo-Marxism in 2008 from the Department of Political Sciences, Slovak Academy of Sciences in Bratislava, Slovakia.
Mr. Blaha was born in Bratislava (Slovakia) on 7 December 1979, and is currently also living here. He is married and has 2 children.

XWe use cookies on our website to give you the most relevant experience by remembering your preferences and repeat visits. By clicking “Accept”,
you consent to the use of ALL the cookies. However you may visit Cookie Settings to provide a controlled consent.
Read MoreREJECTACCEPTCookie settings
Manage consent