Regional disparities in Romania – How do they look like and how to overcome them?

Unequal Romania | Regional disparities in Romania – How do they look like and how to overcome them?

Since joining the EU in 2007, Romania has seen impressive economic growth and has managed to enter the circle of so-called high-income countries. A closer look reveals that the benefits of the post-socialist transition and European integration are distributed quite unevenly and that there is a strong polarisation between different geographical areas. Although regional disparities are increasing, there is no substantial public debate on how to tackle these territorial inequalities.

Read the publication in English or Romanian

The Friedrich Ebert Foundation (FES) Romania and the Foundation for European Progressive Studies (FEPS) invite you to a debate on the growing regional disparities in Romania. The report “Unequal Romania – Regional socio-economic disparities in Romania” performs a cluster analysis, which shows that in terms of living conditions, economic indicators and social welfare, Romania can be divided into four distinct regions – what the authors call “The Four Romanias”. The results of this report underline the need to overhaul the economic and social policies on the national as well as on the EU level.

Juliane Schulte, FES Romania, Members of the European Parliament, Victor Negrescu and Corina Cretu, Laszlo Andor FEPS Secretary-General, together with the authors Cristina Raț and Bastian Heider discussed the solutions which are needed at the national and European levels for overcoming regional disparities and rethinking the development model so that it offers equal opportunities and high living standards to all citizens.

The report has been produced as part of European collaboration with the Friedrich-Ebert-Stiftung and the Foundation for European Progressive Studies at the European level. The project has previously produced a similar analysis in Germany and Finland and analyzes are underway in Sweden, Estonia, and Italy. The indicators have been selected in collaboration with researchers from the Institut für Landes- und Stadtentwicklungsforschung.

This event took place in Romanian and English, with simultaneous translation – AGENDA 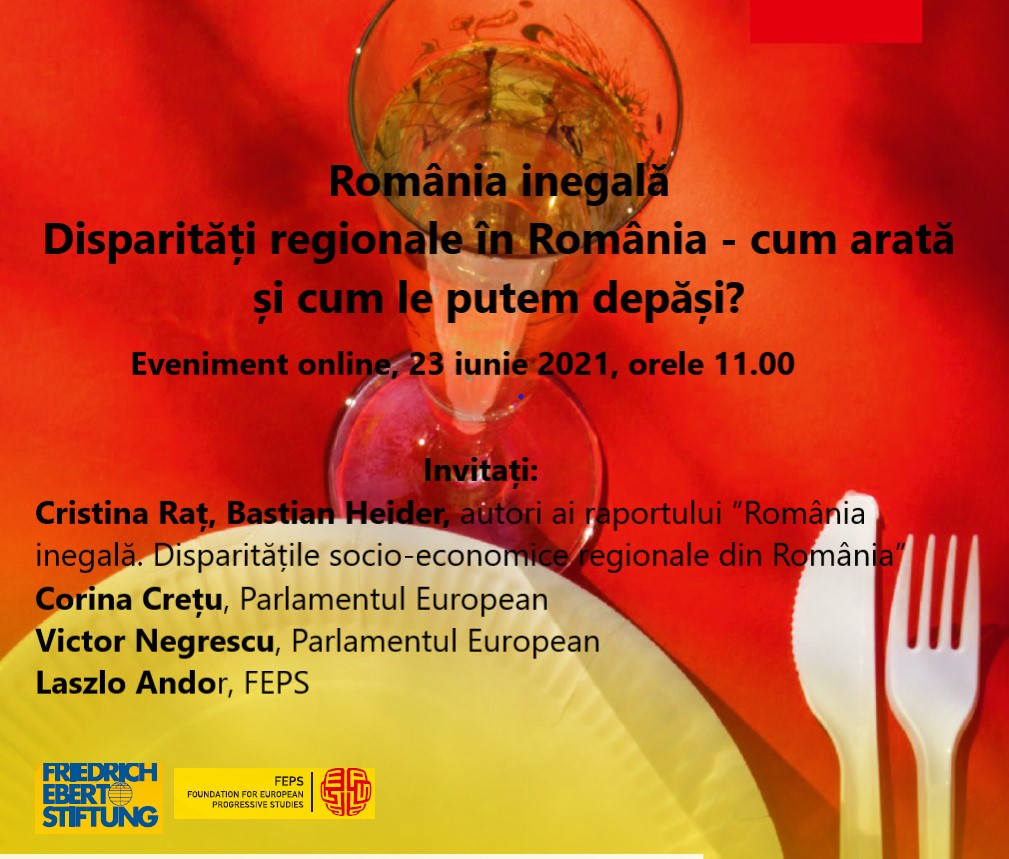 Find all related publications
Publications
See all
Welfare models and economic transformations
Matching free movement of persons and equal access to health for all
Economic policy innovation for Stability, Security And Sustainability
Policy Briefs Series
Find all related events
Events
See all
Upcoming
See all
Recovery Watch series
Past
See all
An ongoing crisis
FEPS, together with Anny-Klawa-Morf Foundation, presented a call for participants for the online Training Day […]
Find all related news
News
See all

The Nobel Laureate in Economics Prof. Joseph E. Stiglitz speak out about EU’s economic governance and fiscal rules […]
Find all related in the media
In the media
See all

by Tilos Rádió 03/09/2022
FEPS Secretary General László Andor participates on 'Régen minden jobb volt' (Everything used to be better) backward-looking history programme on HU 'Tilos Rádió' on Ronald Reagan.
XThis website uses cookies. Some cookies are necessary for the proper functioning of the website and cannot be refused if you wish to visit the website.
Other cookies are used for Advertisement and Analytics (Sharing on social networks, video playing, analysis and statistics, personalized advertising ...) You can refuse them if you want to.
REJECTACCEPTCookie settings
Manage consent