Historically, Italy has been characterised by a marked divide between North and South, with the latter constantly lagging behind in development. However, although it can be pointed out that the socio-economic situation in the South is the main cause of many of the differences at the national level, neither the North nor the South can be considered in homogeneous and monolithic terms. Within these areas, there are profound differences, specific strengths and weaknesses, and untapped potential.

This is what emerges from the report Unequal Italy that we have presented on this occasion. The report, commissioned by FEPS and FES, measures various dimensions of inequality and identifies “four Italies” and “three Mezzogiornos“. After an in-depth analysis of the various facets of the different areas, it proposes precise policy recommendations to remedy the country’s socio-economic disparities.

The report has been produced as part of European collaboration with the Friedrich-Ebert-Stiftung and the Foundation for European Progressive Studies at the European level. The project has previously produced a similar analysis in Germany, Finland and Romania and analyses are underway in Sweden, and Estonia. The indicators have been selected in collaboration with researchers from the Institut für Landes- und Stadtentwicklungsforschung.

This event was in Italian only. 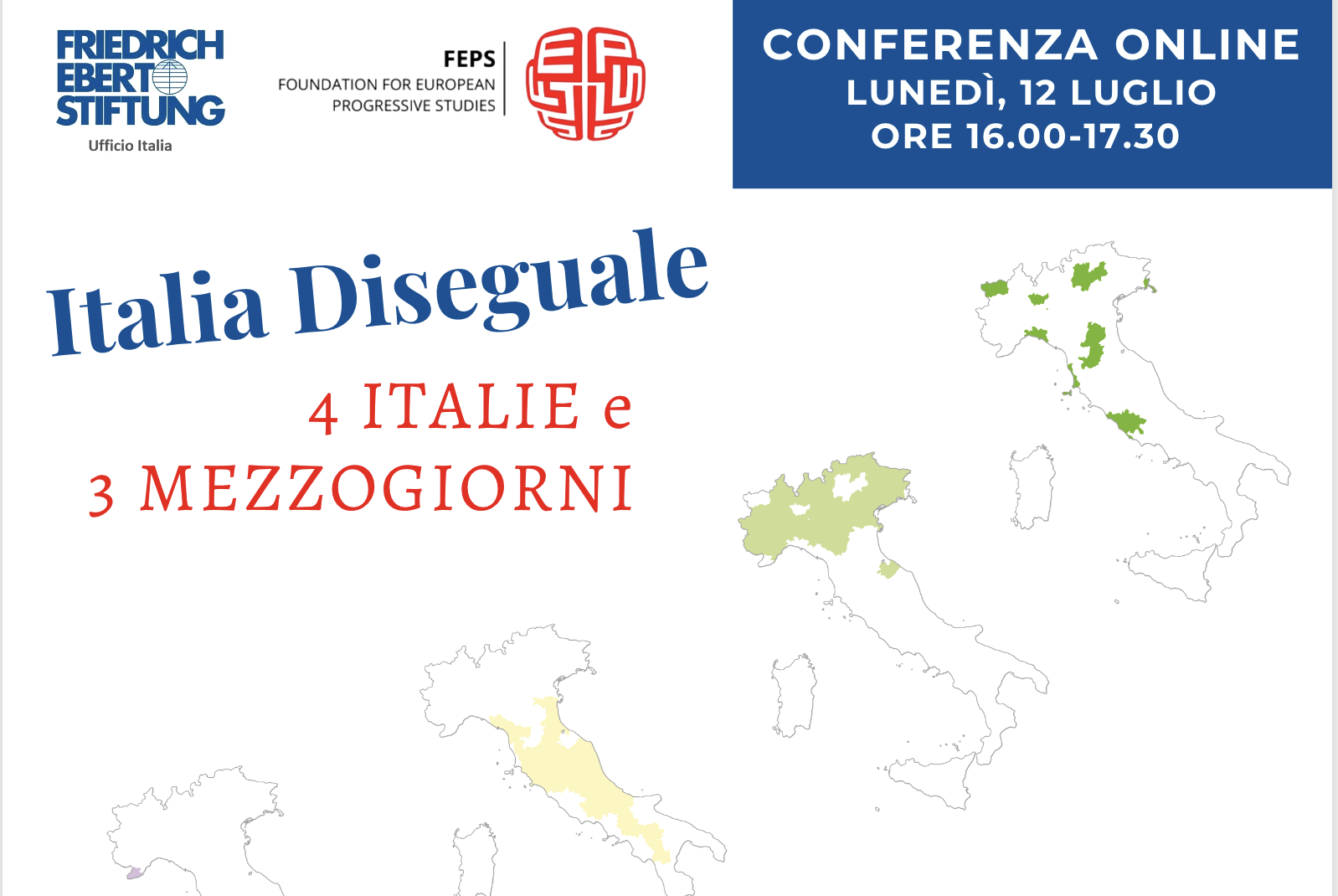 Find all related publications
Publications
See all
How can EU actions support the revitalisation of rural areas? How can EU institutions put […]
European Strategic Autonomy series - Economy & Trade
By FEPS and Initiative for Policy Dialogue (IPD), founded by Nobel Laureate Joseph E. Stiglitz.
As vaccines allow a gradual return to a “new normal”, this book offers an invitation […]
Find all related events
Events
See all
Upcoming
See all
School for young local leaders, 7 – 9 July, Reggio Emilia (IT) This year’s School of […]
Past
See all
Hybrid Conference, Berlin (Germany), 30-31 May 2022 We are embarking on the frequently invoked “decade […]
22 April 2022, Palermo (Italy) The pandemic and the various public health measures adopted to tackle its […]
Find all related news
News
See all

FEPS supports the Statement of the Progressive Alliance: Global solidarity is the key to overcoming COVID-19

Belgians resigned but not yet panicking as prices continue to rise

01/02/2022
XWe use cookies on our website to give you the most relevant experience by remembering your preferences and repeat visits. By clicking “Accept”,
you consent to the use of ALL the cookies. However you may visit Cookie Settings to provide a controlled consent.
Read MoreREJECTACCEPTCookie settings
Manage consent