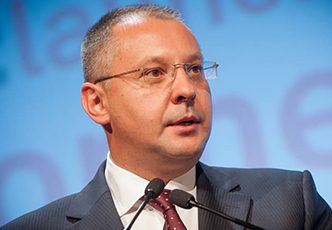 Ex-officio member as President of PES

Member of the European Parliament elected in 2014.

Sergei Stanishev was born on the 5th May 1966. He studied history, in which he holds a PhD. He was a visiting fellow in International Relations at the London School of Economics and Political Science. Prior to his political career he worked as a journalist.

Bureau
Find all publications by Sergei STANISHEV
Publications
See all
If we do not overcome the twin crises that we face – climate change and […]
Find all events with Sergei STANISHEV
Events
See all
Virtual festival, 25-27 May 2021 ‘Recovering Europe: Mind the Social Gaps’ was the topic of […]
Find all audiovisual with Sergei STANISHEV
Audiovisual
See all
XThis website uses cookies. Some cookies are necessary for the proper functioning of the website and cannot be refused if you wish to visit the website.
Other cookies are used for Advertisement and Analytics (Sharing on social networks, video playing, analysis and statistics, personalized advertising ...) You can refuse them if you want to.
REJECTACCEPTCookie settings
Manage consent