The Talking Green UK policy studies investigate how progressives can improve the way they communicate with the public on climate change. To do this, the FEPS and the Fabian Society developed a survey in consultation with an academic advisory group and a range of experts and stakeholders. The survey was carried out by YouGov in October 2021 and polled 5005 people across the UK.

This Policy Study investigates respondents’ perceptions of how relevant climate change is compared to other policy issues. It also analyses opinions on particular policy measures and people’s reactions towards different frames and narratives.

The study finds that although the public is concerned about climate change and want action, other policy areas such as the economy, health or Brexit are prioritised. Furthermore, environmental concerns vary with age, education, political alignment, and social class.

While there is a general optimism on the benefits of climate action for job creation, equally cleavages among social groups can be observed. Moreover, there is still considerable confusion over the impact of climate action on jobs and the terminology used (i.e. green jobs, net zero).

With regards to communication employed by progressives to reframe the debate on climate action, the study concludes that:

– Economic messages such as a focus on green jobs mostly preach to the converted and fail to persuade groups who need persuading most.
– Messages emphasising the quality of life and care for nature had broader appeal across the whole sample.
– Messages about specific jobs (e.g. in construction, plumbing) resonate more with people than abstract slogans. 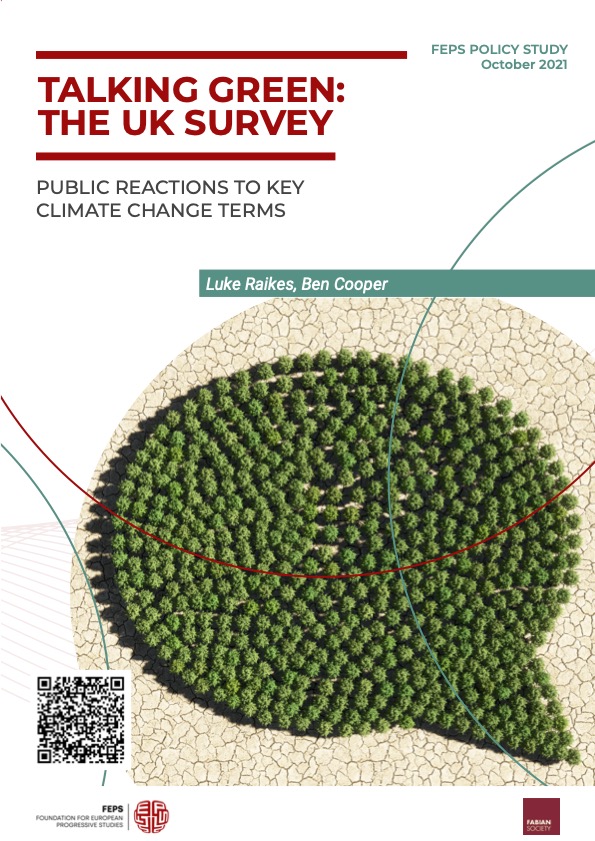 Politicians, the media and activists must improve the way they talk about climate change. There is general support for the government to take action on climate change and people do see the opportunity to create jobs – though this view isn’t overwhelming and opinions do vary between demographic and political groups.

In this briefing, we conclude that politicians, the media and activists should start to:

– Refer to ‘net zero’ using clearer, more commonly understood words and, where there is no alternative but to use this term, elaborate on what it means.
– Talk about specific jobs and their quality, rather than leading on the fact that they are ‘green’ – as this seems to provoke scepticism and has far more of an association with the climate agenda than regeneration. This defeats the purpose of making the economic case.
– Resist the urge to ramp up the rhetoric by referring to the ‘green industrial revolution’, or large numbers of jobs, which provokes a significant negative and sceptical response from the public.

About the Talking Green research project

‘Talking Green’ is a research project that explores perceptions of climate actions across Europe, through surveys in:

It develops an understanding of how the green transition is perceived especially by low- and middle-income people.

The collected data allow progressives to find the most effective ways to talk about climate change and develop participatory and effective policy proposals that address climate change while delivering a just transition that is aligned with people’s concerns.

This project is run by FEPS, in partnership with the Fabian Society, TASC, the Szociális Demokráciáért Intézet and the Progressive Hungary Foundation.

Network
Find all related publications
Publications
See all
Recovery Watch Series
In an era marked by a deficiency in sustainable growth and a profusion of novel […]
How just and how equal?
Lessons on re-framing the public debate on the climate crisis
Find all related events
Events
See all
Upcoming
See all
Geopolitics of energy and the green transition
Past
See all
Stakeholder meeting
Climate mainstreaming and holistic policy design in the face of multiple transitions
Find all related news
News
See all

New Policy Report on the Green Deal: achieving sustainability and equity in a post-COVID-19 era

The Foundation for European Progressive Studies (FEPS), together with the Institute for European Environmental Policy […]
Find all related in the media
In the media
See all

by Crónica Global 18/11/2022
Article by Pau Solanilla, Director of Fundació Rafael Campalans, ahead of the FEPS-Campalans event 'Figuring out the Twin Transition'

by ABC 18/11/2022
Article by Pau Solanilla, Director of Fundació Rafael Campalans, ahead of the FEPS-Campalans event 'Figuring out the Twin Transition'

by elEconomista.es 16/11/2022
Article by Pau Solanilla, Director of Fundació Rafael Campalans, ahead of the FEPS-Campalans event 'Figuring out the Twin Transition'

by Euronews 08/09/2022
XThis website uses cookies. Some cookies are necessary for the proper functioning of the website and cannot be refused if you wish to visit the website.
Other cookies are used for Advertisement and Analytics (Sharing on social networks, video playing, analysis and statistics, personalized advertising ...) You can refuse them if you want to.
REJECTACCEPTCookie settings