Pax Americana vs. Inclusive Security in the Middle East

The Persian Gulf has long been considered as lacking the readiness for an inclusive security architecture. The political tensions both between Iran and the Arab states as well as between key Arab states in the Gulf Cooperation Council (GCC), combined with weak political institutions and a preference by GCC states to live under a US security umbrella, are believed to have undermined efforts by outside actors to encourage the creation of a new security architecture. However, this analysis misses a more profound structural challenge that the region suffers from: as long as the United States maintains a posture of dominating the region militarily, many regional states will be disincentivised to demand an inclusive security arrangement or develop readiness for it. For many of America’s security partners, even a dysfunctional Pax Americana is preferable to the compromises that the creation of a security architecture inevitably would entail. This paper argues that only if the United States begins a military withdrawal from the Middle East and credibly signals its disinterest in sustaining hegemony can the preconditions for the creation of a successful security architecture emerge. 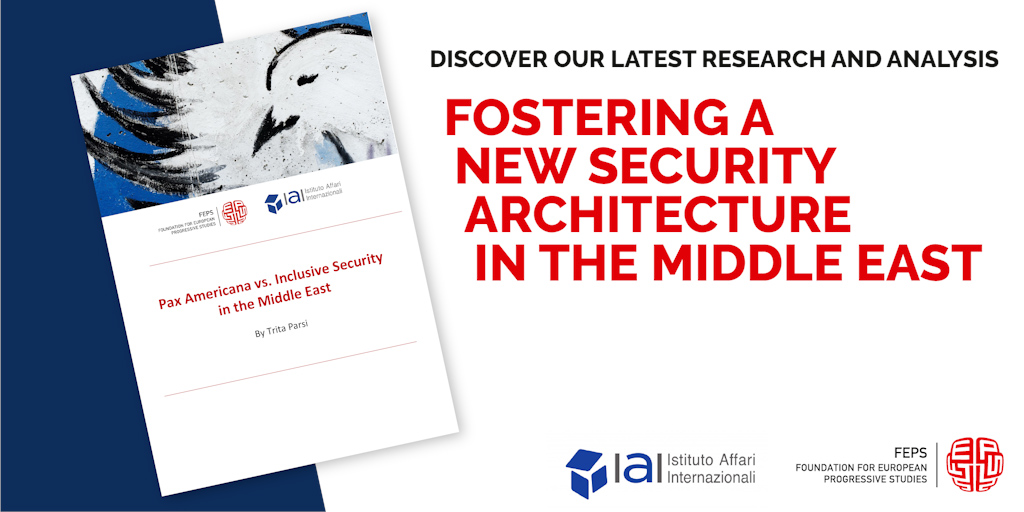 Find all related publications
Publications
See all
The case for public digital infrastructure
Looking back to look ahead
European Strategic Autonomy series - Digital & Technology
European Strategic Autonomy series - Economy & Trade
Find all related events
Events
See all
Upcoming
See all
Foresight series: The long-term implications of the war in Ukraine
Past
See all
Looking back to look ahead
Addressing the Triple Planetary Crisis through improved global governance
Find all related news
News
See all

On May 23rd, FEPS organised a timely expert meeting on the war and the reconstruction […]
Find all related in the media
In the media
See all

by Público 12/01/2023
Público's article about the manifesto signed by 50 personalities from Portugal and Brazil, including FEPS President Maria João Rodrigues, in support of Lula’s environmental policy

by News Bulletin 09/01/2023
Manifesto signed by 50 personalities from Portugal and Brazil, including FEPS President Maria João Rodrigues, in support of Lula’s environmental policy

by Tilos Rádió 12/11/2022
FEPS Secretary General László Andor participates on 'Régen minden jobb volt' (Everything used to be better) backward-looking history programme on HU 'Tilos Rádió' on Franklin D. Roosevelt.
XThis website uses cookies. Some cookies are necessary for the proper functioning of the website and cannot be refused if you wish to visit the website.
Other cookies are used for Advertisement and Analytics (Sharing on social networks, video playing, analysis and statistics, personalized advertising ...) You can refuse them if you want to.
REJECTACCEPTCookie settings
Manage consent