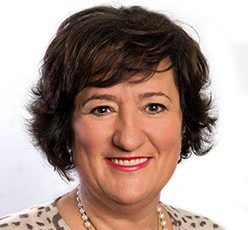 After finishing the University of Economic Sciences in Budapest, Zita Gurmai worked in the private sphere, in numerous companies. She finally turned to politics in 1995, becoming the chargé d’affaires of the Women’s Organisation of the Hungarian Socialist Party, that she has been chairing since 2001. She became vice-chair of the Socialist International in 1999 and 2003 until 2008. She has benn member of the Hungarian Parliament between 2002 and 2004 and from April 2018 to date.

Bureau
Find all publications by Zita GURMAI
Publications
See all
The Leaders' Vision for Europe's Future
Find all events with Zita GURMAI
Events
See all
Virtual festival, 25-27 May 2021 ‘Recovering Europe: Mind the Social Gaps’ was the topic of […]
XThis website uses cookies. Some cookies are necessary for the proper functioning of the website and cannot be refused if you wish to visit the website.
Other cookies are used for Advertisement and Analytics (Sharing on social networks, video playing, analysis and statistics, personalized advertising ...) You can refuse them if you want to.
REJECTACCEPTCookie settings
Manage consent