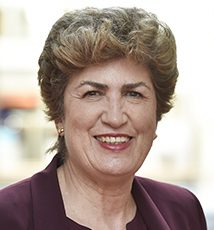 Since 2017 is the President of the European Foundation of Progressive Studies (FEPS), the only progressive think tank at the European level, formed by forty national member foundations across Europe.

Recently, she was Vice-President of S&D Group in the European Parliament, a parliamentary group with 189 members from all Member States, where she was in charge of the coordination of the parliamentary work and the inter-institutional negotiation on the EU agenda.

As an academic, she is full professor and was the Chair of the European Commission Board for socio-economic research. She has around one hundred publications and as expert and politician, has done more than two thousands conferences across Europe and the world.

BureauPresidentScientific council
Find all publications by Maria João RODRIGUES
Publications
See all
Reinforcing europarties ahead of the European elections
FEPS’ Progressive Yearbook has become a tradition and is now close to the heart of […]
FEPS contribution to the Conference on the Future of Europe
What an extraordinary year 2020 was! And what an extraordinary challenge it is to drive […]
Load more ...
Find all events with Maria João RODRIGUES
Events
See all
The Road to the 2024 Summit of the Future
How can a global just transition be financed? Multiple building blocks — theoretical, practical, and […]
Think global, act local?
Load more ...
Find all news about Maria João RODRIGUES
News
See all

On May 23rd, FEPS organised a timely expert meeting on the war and the reconstruction […]
Load more ...
Find all in the media about Maria João RODRIGUES
In the media
See all

by EuropaPress 24/11/2022
EuropaPress echoes the 'Twin Transition' event in Barcelona, organized by FEPS and Fundació Campalans, with the participation of Salvador Illa and FEPS President Maria João Rodrigues.

by Mundo a o minuto 10/05/2022
Find all audiovisual with Maria João RODRIGUES
Audiovisual
See all
Load more ...
XThis website uses cookies. Some cookies are necessary for the proper functioning of the website and cannot be refused if you wish to visit the website.
Other cookies are used for Advertisement and Analytics (Sharing on social networks, video playing, analysis and statistics, personalized advertising ...) You can refuse them if you want to.
REJECTACCEPTCookie settings
Manage consent